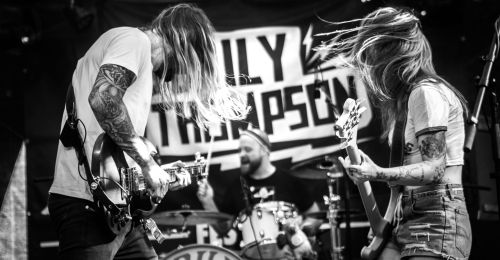 DAILY THOMPSON is ready to take off from their home base Dortmund once again!

Influences from grunge, garage and indie rock work together for a completely overdriven, extremely fuzzy Bigmuff. Their sound is rich in noise, indie-blues and stoner-rock. With the Daily Thompson’s usual fuzz, wah-wah and distortion attacks, they now make the engines howl.

Even after a full year in fast-forward-mode, Daily Thompson doesn’t seem to get tired. New songs were written, recorded and the third album ‘Thirsty’ will see the day of light on November 9th. Especially for the album, the band has said goodbye to the heavy tour routine for three months. No shows, no festivals, just writing, playing, discarding and reworking songs. Extensive jams and the complete let-go of genre-typical riffs have paid off: Daily Thompson’s new program is diverse and also contains some novelties. Bass-player Mercedes for instance sings a solo part on ‘Roots’ and doesn’t only support front-singer Danny Zaremba with backing vocals as usual. With songs like ‘Nowhere’, ‘Brown Mountain Lights’ and last but not least ‘Stone Rose’, the band also has some serious hits to offer. Stefan Mengel finally completes the band at the drums.

The trio has spent the last three years on the road. Back in the days, one used to wake up between beer cans and other trash but times changed and staying the night in hotels does not conflict with being authentic at all. In fact, Daily Thompson have already proven themselves as a certificated rock sensation during countless shows, including festivals such as the WDR Rockpalast, Crossroads Festival, Reeperbahn Festival, Orange Blossom, Special Festival or Krach Am Bach. Stages were shared with bands from the likes of Earthless, Mustasch, Nebula, Truckfighters and many more.

Although the band is constantly on tour, they simultaneously release singles and albums like the self-titled debut album in 2014. One year later, they put out the split 7″-vinyl ‘Spit Out The Crap’ together with the US band Mos Generator and in 2016 the band released their second album ‘Boring Nation’. Plus, they celebrated the release of the split 7″-vinyl ‘River Haze’ at Reeperbahn Festival in 2017. Their new album ‘Thirsty’ was now signed by MIG Music under the sublabel Hänsel & Gretel, will be released at November 09th and is followed by an extensive European tour! 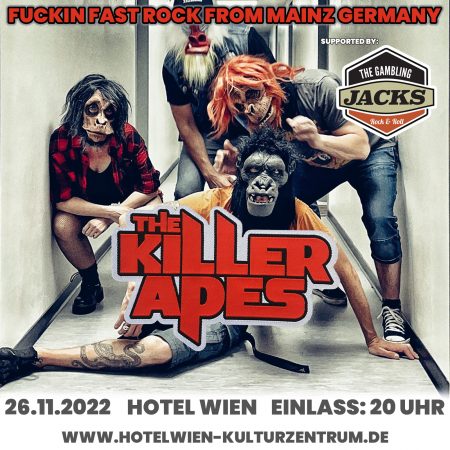 The Killer Apes & The Gambling Jacks

This website uses cookies to improve your experience while you navigate through the website. Out of these, the cookies that are categorized as necessary are stored on your browser as they are essential for the working of basic functionalities of the website. We also use third-party cookies that help us analyze and understand how you use this website. These cookies will be stored in your browser only with your consent. You also have the option to opt-out of these cookies. But opting out of some of these cookies may affect your browsing experience.
Necessary immer aktiv
Necessary cookies are absolutely essential for the website to function properly. This category only includes cookies that ensures basic functionalities and security features of the website. These cookies do not store any personal information.
Non-necessary
Any cookies that may not be particularly necessary for the website to function and is used specifically to collect user personal data via analytics, ads, other embedded contents are termed as non-necessary cookies. It is mandatory to procure user consent prior to running these cookies on your website.
SPEICHERN & AKZEPTIEREN